If you’re going to Zagreb this weekend, be sure to stop by Petar Preradović Square, popularly known as Flower Square. You’ll probably stop there anyway to grab a cup of coffee, but this Saturday you will find there something else – poetry. (Za ovaj članak na hrvatskom jeziku klikni ovdje! / For Croatian click here!)

At 12 o’clock (this Saturday, March 17, 2018), you will find me there as well, since I’ll provide, together with a colleague of mine, a short and a little bit different guided tour of the square and surrounding streets. The tour will be in Croatian, but don’t hesitate to stop me after 45 minutes of the tour to tell you something in English/French/Portuguese/pantomime…

(I look tired in the photo above – in fairness, this was my 10th attempt in trying to fit me, Petar Preradović and the tower of Zagreb’s Serbian Orthodox Church all in one frame. When I finally made it, I didn’t really care about the look on my face.)

The occasion for this tour is special – we are marking 200 years since the birth of Petar Preradović, one of the most important poets of Croatian romanticism, who gave the name to the square (did you notice his statue in the middle?). Although he was part of the Illyrian movement, a political and cultural campaign of the 19th century that influenced Croatian culture as it is today, I can say without hesitation that Petar is almost forgotten in Croatian culture. He is read in school and that’s basically it… That’s not his problem, though, poetry in general is somehow forgotten in our modern society. 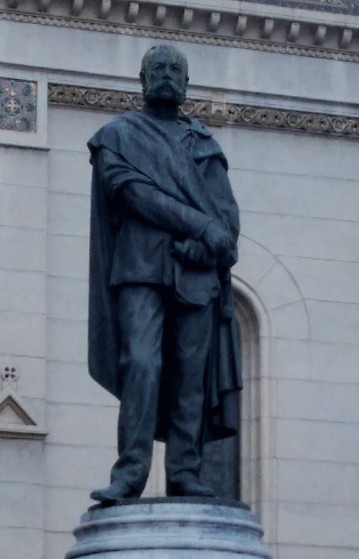 Preradović was born on March 19th, 1818, in Grabrovnica, near Pitomača, less than two hour driving distance from Zagreb, Croatia’s capital. He was a military general, a translator, but above all – a poet. In his poems, patriotism and love for our country is widely present, always with a sense of melancholy and sadness.

I don’t want to use this post to bother you with historical and cultural details, but in short – in the 19th century, Croatia was part of the Habsburg Monarchy (later Austria-Hungary). Austrian/German and Hungarian culture and language were very influential within the whole empire and Illyrian movement was started to revive Croatian national, political, cultural and linguistic identity. “Finding your patriotism” was a common theme for many authors of this period.

Since there is a lot of travelers and travel bloggers on this platform, I would like to end this song with a part from Preradović’s poem Putnik (Traveler). Very sad song about a man who abandoned his home, trying to find it somewhere else and realizing that there is only one home / homeland / motherland. Not many translations of his work can be found, so I am very happy to present to you these verses, translated by Barry Hajdinjak and Gordon Biok. Translating poetry is an extremely difficult taks and they’ve done it beautifully. The complete poem in PDF can be found here.

If you want to receive an email when new posts are published, you can easily find “Follow by email” at the top of the page. You will receive two emails – in the first you must confirm that the email is correct, in the second you will get  confirmation of your subscription from WordPress.

You can also find me on…

3 thoughts on “A poet and a traveler”

Thank you for your...

CHECK WITH ME IF YOU WANT TO COPY…

MY TEXTS – I write about history, culture and nature. I don’t mind if someone decides to copy information from my blog. Historical data can be found all over the Internet. However, some of the content are my personal insights, opinions or experiences and can’t be copied without checking with me and crediting me as a source.

MY PHOTOS – Most of the photos are my own and they can’t be used for your commercial activity unless checked with me.

OTHER PHOTOS – If I use somebody else’s photo, I always check with the author and credit him/her so you must do the same!

Some photos, maps or flags are taken from open libraries, like Wikimedia Commons or Pixabay. If the author is known, I always credit him/her.