If you’ve been to Zagreb and now you’re wondering “How could I miss the sculpture of a dog?”, you’re not the only one. A lot of people from Zagreb doesn’t know the story of Pluto, even though he can be found on a very busy street, Bogovićeva, just thirty seconds of slow walking distance from the main square of Ban Jelačić. So, what is Pluto’s story?

If you’re a bit cynical, you could say: “He’s probably some odd security measure that is protecting the bank in that very building.” And, oddly enough, you would be right.

Pluto’s story dates to the late 1890s when the palace of the First Croatian Saving Bank was being built. The building is today known as Oktogon (Octagon) and has a passage connecting two squares of Zagreb’s city center – the main square of Ban Jelačić and the square of Petar Preradović, also known as Flowers Square. In the middle of the building there is a dome of eight corners that gave the name to the building (in Latin, “octo” means “eight”).

But, let’s go back to 1890s. One day, an exhausted, hungry stray dog came to the construction site of the new bank. He was friendly, the workers gave him some water and food and… he decided to stay. The construction site of Oktogon became his home. Josip Vancaš, the chief architect, named him Pluto and he became known as “construction dog” (“građevni pas”).

He became very popular. Also, having a construction dog proved to be quite handy. Pluto became a night guard, chasing away smugglers who tried to enter the construction site and steal construction material. Unfortunately, one night he ended up being killed by one of the smugglers.

The workers were devastated and they decided to pay respect to Pluto by making a small relief sculpture and putting it in the new bank’s backyard.

For many years, Pluto stayed in the backyard and his story was almost forgotten. Some parts of the building were not open to the public and the sculpture was eventually in a bad shape. In 2012, it was rediscovered and an initiative was born to show Pluto to the public. A year later, the sculpture was moved to the southern wall of Oktogon, in the middle of the pedestrian zone of Bogovićeva Street, a popular place to drink coffee in Zagreb.

Today, during their coffee breaks, more and more people are noticing the dog quietly watching and protecting the street, like he always did. He is slowly becoming one of Zagreb’s symbols as well.

So, if you’re still wondering how could you miss Pluto on your first visit to Zagreb, I have a simple solution: Come again and don’t miss him this time! And if you’re thinking about coming to Zagreb for the first time and you’re also an animal lover, well here’s just one more reason to invite you to my city… 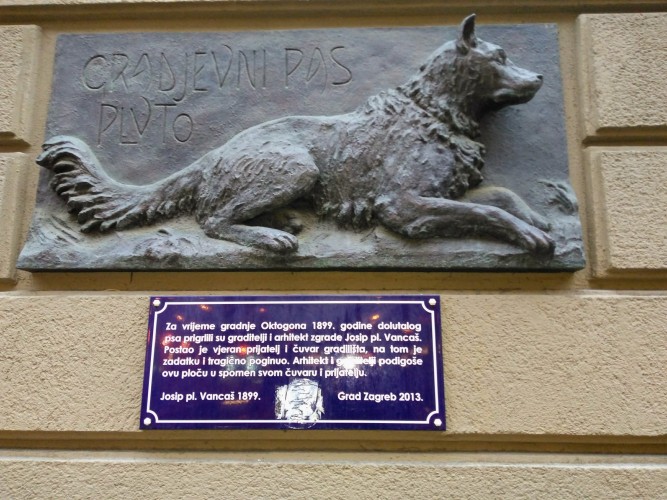