So, I got a text from a friend: “I went to mass on Sunday in Zagreb’s cathedral and I couldn’t focus, all I could think about were the casino’s chandeliers from your last post.” Distracting people from religion wasn’t my intention when I started writing about Zagreb and Croatia, but the damage is done, I guess. As promised, this week I’m writing about the carnival and the region of Kvarner. And I’m sorry if I will distract someone again, but I have to at least mention the ancient pagan rituals of sexuality and fertility…

Longer read. The idea of this post is to give you a historical and cultural perspective of this strange tradition to wear masks in February. How was the carnival created in the first place, what are some old traditions and costumes that lasted all the way to our modern times?

Also, apparently there is a US family that recently moved to Croatia. It was very interesting for me to read something about our traditions from a foreigner’s perspective. Check this post of Tanya Travels! 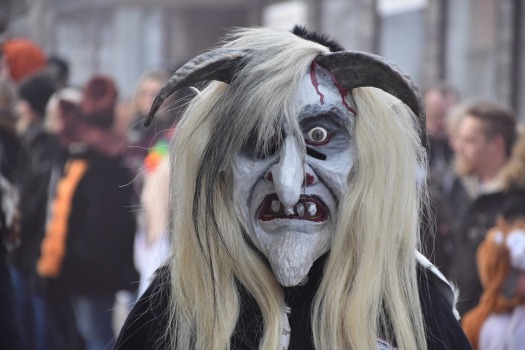 In general, many things about the carnival today are the same as they were in the Early Middle Ages or even before. The carnival celebrates the end of winter – spring is coming and the nature is becoming fertile again. Thousands of years ago, winters were extremely difficult, especially for the common people. In November, December and January, you had to rely on what you have stored during summer and autumn and there was no shopping centers like today where you could easily buy some meat. At the same time, the refrigerators didn’t exist so you could store your meat, lard or butter only for a short period of time, before they start to rot. And here comes the end of January and the beginning of February, a period where all the food from the previous year had to be eaten. After that, there was a short period of time before Easter when you were without the meat. You have “removed your meat”. Italian words carne (meat) and levare (to let go) created the word carnevale; carnival. In Croatian, some regions call this festivities mesopust – it’s the same expression, combining two Croatian words, meso (meat) and pustiti (to let go).

Imagine the joy and happiness of these people – after a hard winter, to be able to finally eat all what was left of their rations. Of course, when you have a lot of meat, you have a lot of drinks. With a lot of alcohol, comes music and dance. You can finally do what you couldn’t do during a terrible winter. You can do whatever you want! You can be whatever you want! The mask became a crucial element of this – behind the mask, we are not ourselves and we can behave a little bit differently and be anybody that we want. People relaxed a bit, with women dancing erotically and men dressing up as women – for a short period of time, it became socially acceptable to be “unacceptable”. That is the carnival today and that was the carnival many centuries ago.

In Croatia, we have many carnival traditions. Close to Zagreb, we have fašnik in the lovely city of Samobor. But the region of the carnival is definitely Kvarner. The whole region transforms into a huge carnival. In 2018, its final parade in Rijeka is this Sunday, February 11th! Check the official page of Rijeka Carnival and the official page of Rijeka Tourist Board, with many information about the city and the region!

In central parade, the masks are becoming more and more extravagant, but the most popular participants of the parade are still the most traditional ones – zvončari; the bellmen. Their primary task is to scare away the evil winter-spirits and announce with their bells the arrival of spring. Their costumes may vary from a village to village, but typically they have a stripped shirt and white trousers with one or more bells around their waist. Some of them wear exaggerated animal heads, in order to scare the spirits of winter. One of the most popular groups comes from the region of Kastav – they are the bellmen of Halubje. You can check their page here!

According to some scholars, the Bellmen are probably related to old Pagan Slavic cults of fertility, praising Veles, Slavic God of the Earth. Jokingly, it’s an obvious call to women to make love. They have a big ding-dong around the waist, they make some noise and entertain the ladies. This is a joke only in part, because carnival in general is exaggerating everything, including our sexuality. The masks are there for a reason – we can be something different, something over-the-top. Not only in Kvarner, all over the world it’s quite common to see men dressed up as women and vice-versa, but only during carnival is this gender-swapping socially acceptable and entertaining. In Brazil, crucial part of the carnival are almost naked samba dancers (not that I’m complaining). Who knows… Carnival and Valentine’s Day are not related, but maybe it’s not a coincidence that there is a day dedicated to love and sensuality in the month of February. The carnival ends on Ash Wednesday – and this year it’s February 14th.

To end their carnival, every town of Kvarner will burn a pust, a man-like-doll who is blamed for everything bad that happened the previous year. I end this post with a photo from Opatija, a lovely pearl of the Adriatic coast. I will dedicate one of my future posts to Opatija entirely, but for now, a photo from the Opatija’s market of their pust. He will be on fire next week, all of our problems will be gone and a new year will start.

(There are many, many things about the carnival of Kvarner that I can talk about, but it will simply be too long… Come to Kvarner in February, put a mask and enjoy the party yourself!)

One thought on “Rijeka, Kvarner: Get a mask, eat your meat, hear the dong (by dong I mean bell)!”

Thank you for your...

CHECK WITH ME IF YOU WANT TO COPY…

MY TEXTS – I write about history, culture and nature. I don’t mind if someone decides to copy information from my blog. Historical data can be found all over the Internet. However, some of the content are my personal insights, opinions or experiences and can’t be copied without checking with me and crediting me as a source.

MY PHOTOS – Most of the photos are my own and they can’t be used for your commercial activity unless checked with me.

OTHER PHOTOS – If I use somebody else’s photo, I always check with the author and credit him/her so you must do the same!

Some photos, maps or flags are taken from open libraries, like Wikimedia Commons or Pixabay. If the author is known, I always credit him/her.